Mai Hove talks about the importance of growing drought resistant small grains in Zimbabwe Zimbabwean writer, editor and poet Emmanuel Sigauke speaks on importance of the Muonde initiative to encourage indigenous creativity and about his writing inspired by the Mazvihwa landscape of his childhood

“With a background in forestry, I have been working for many years in rural development projects dealing with environmental restoration and the promotion of integrated natural resource management. Working with “open eyes” one quickly realizes particularly under semiarid and continental climatic conditions, in many regions more efficient rainwater harvesting and utilization could be potentially a very useful way to reduce environmental degradation and to improve local agricultural production.

In situations, where it is not possible to bring open minded farmers in direct contact with farmers, which count already with a long history in practicing innovative ways of natural resource management- small documentary films can help to bridge the gap.
During an assignment In Tajikistan-Central Asia some years back I had organized already the production of a few documentary films portraying local innovators. The films are used up to the present by different organizations even in neighboring countries for training purposes. 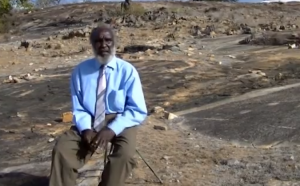 The first time I became aware about Mr. Phiri was through Brad Landcaster”s “Rainwater Harvesting for Drylands and Beyond”. I searched in the Internet for a possible film documentation about Mr. Phiris natural resource management approach- but only found links to written articles. I than consulted with a professional film producer about the possibility of producing a film about Mr. Phiri together- but his financial expectations were very high.

At the end I decided to try to use a private trip to Zimbabwe to pay a visit to Mr. Phiri and his family- and to see, whether during that occasion an opportunity would arise to do some filming with him. And indeed: Mr. Phiri and his wife, who had been informed in advance by his colleague and close friend Ken Wilson about our coming, received me and my mother in a very open and friendly manner. Despite his age and some physical disabilities affecting him, Mr. Phiri is mentally still a very active, interested and humorous person. Asking him to start taking some film images and images already with the first sunlight in the morning because of favorable light conditions, was also not a problem at all- one notices, that Mr. Phiri has along his long life been a committed, hard working person.

All in all I spent two days with Mr. Phiri and another day at about 80 distance with other small farmers, who have been influenced by his work. The raw material for another section of the film was taken at Chikukwa-Permaculture Centre in the Chimannimani-area . The entire filming has been done with a simple compact film camera.

Back in Germany it took another while to find a professional film editor and speaker, prepared to work on a very low budget (the film has been financed using only private funding). Anyway, at the end the short documentary about Mr. Phiri’s impressive experience has been completed- and I hope, that many people in different parts of the world will benefit from his insights.” -Frank Loewen