The adult education program at Gwavachemayi, generously funded by one of our individual donors, is the first such effort in a rural school in Zvishavane and possibly in the country. The students study in the 1-5pm slot after the regular students, with teachers receiving top-up salaries for their extra work. The effort was launched by popular demand in response to the fact that after several years of hardship the cessation of teachers’ salaries and the crisis conditions of 2008 led to the effective closure of the school at that time and the abandonment of formal schooling. 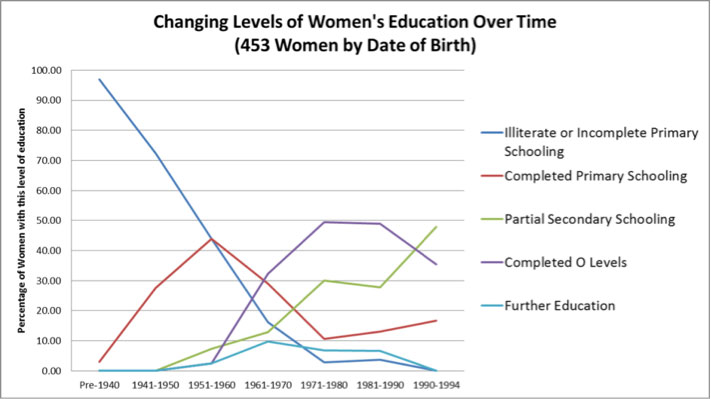 Data from Muonde local researchers on women’s education achievements in the area until 2010.

As indicated in the Table a steady improvement, generation upon generation, ended for those born after 1990 whose chances of completing secondary school dropped from 50% for those born in the 1970s and 1980s to around 35%. Meanwhile access to further education has sadly been declining ever since the generation born in the 1960s who came of age in the decade of Independence. Working with the headmaster and teachers of Gwavachemayi, and the District Education Office in Zvishavane, Muonde Trust created a programme that for $10,000/year could enable all committed adults in the area to come back to school for their two ‘O’ level years in 2014 and 2015. On the one hand the programme has been a huge success. Around 100 adults enrolled, making the program very cost effective at $100/student/year, with the likely potential of greatly improving the graduates’ incomes, let alone quality of life. Mr. Hogwe, the senior teacher, told Daniel Mawere, the student intern sent to evaluate the program in late 2014 that the adult learners were not only doing exceptionally well, but they were also inspiring the children with the value of education. One of the women enrolled (aged 30 in 2014) told us that she had managed to pass three subjects (a great achievement in the 2000s) and that through this program she could add additional subjects that could render her highly employable (five subjects being the national standard). She said, however, that her husband, who is educated and a soldier in the National Army, had grumbled that she should have completed her education before marriage. She told us crisply “issues of gender equality still need to be redressed so we will empower our nation.” This leads us to the main problem: the program suffered a tragically high level of female drop out.

Daniel’s studies showed that this reflected, sadly, not only the fact that it was hard for some women to juggle care for small children, being bread-winners and studying that many hours per day, but that many of their husbands were threatened by their commitment to education, including as reflected in men having to do domestic tasks in support of their studying wives or search for funding for pens and text books. Mr. Hogwe said such husbands “are feeling insecure and demoted” and one teacher interviewed a husband who had stopped his wife from studying who said “mukadzi wangu haachanditeereni nokuda kwechikoro”, in other words that her studies meant he would lose authority over her. In other cases men who had left the area in search of work to support their families at home were nervous of their wives interacting freely in a school environment because they felt they could start love affairs during a long absence. Meanwhile another enrolled woman student, told us that “their husbands were in South Africa [when they enrolled] and when they came [home] they listened to silly rumours that their wives are cheating with teachers and other male students and they were forced to quit”. Efforts by the school to confront these attitudes included a meeting with the community in July 2014 after which some of the women were able to re-enroll, and many of the women were able to continue. Another idea from the students raised in this review was to move classes earlier so that women could get home before dark, and we are pleased to report that for the 2015 year the school has changed the hours to be from 12:30 to 4:30pm.

Of course there were many other reasons for drop out – for both men and women – including economic hardship (although there are no fees there are many other costs, and the poor work so hard that they’ve little time to study). Others found that they were no ready to return to the bench. Muonde will closely monitor what happens in 2015 in the hope that we will not see further decline from the approximately one third who dropped out in 2014.

This experience was a reminder to Muonde that systematic and imaginative efforts will be needed to engage men as husbands and fathers in backing the struggle of Mazvihwa’s women for education and equality. We should have joined the teachers in follow up on each case of drop out to see if we could encourage the student or discuss with a hostile husband its importance. And of course we could have made more efforts to help the many husbands who support their wives education to talk to their peers.
Notwithstanding these limitations and challenges, this program has transformed the life-long employment prospects of more than fifty young members of the Mazvihwa community, and done much to restore pride and morale in education. Indeed, despite being one of the most marginal schools in the District, Gwavachemayi’s exam results in these years of recovery have been some of the very best in the region.

In addition to the adult education program for “O” levels, and with support from individual donors, Muonde Trust continues to provide small bursaries to disadvantaged and orphaned young people in the area to study for their “A” levels in the nearest school to Mazvihwa (which is at Takavarasha in Chivi).
The ongoing bursary students for 2015 are:

Meanwhile the first of our current wave of students to complete their program, Maria Chinguo (whom we supported as an orphan for two years of “A” Level at Muzondo High in Takavarasha); and has earned an A in Shona (the national language) and a D in Business Studies. As such she qualifies for further studies and Muonde is exploring with her the possibility of studying at Great Zimbabwe University in 2016. But this will take serious fund raising as he will need annually some $1300 in fees; $560 for accommodation; and $1200 maintenance,

The evaluator for this program in 2014 was first of our interns was Daniel Mawere, from Mudhomori Village and studying at Midlands State University who did his work placement with the Centre for Applied Social Sciences at the University of Zimbabwe and undertook field studies of the people relocated by the Murowa Diamond Mine to Shashe. He has also assisted the Muonde Team undertake evaluations in Mazvihwa in his vacation. On successful graduation, he now works full time for the Trust.

One Response to Education: 2015 Statement of Program Rationale and Outcomes