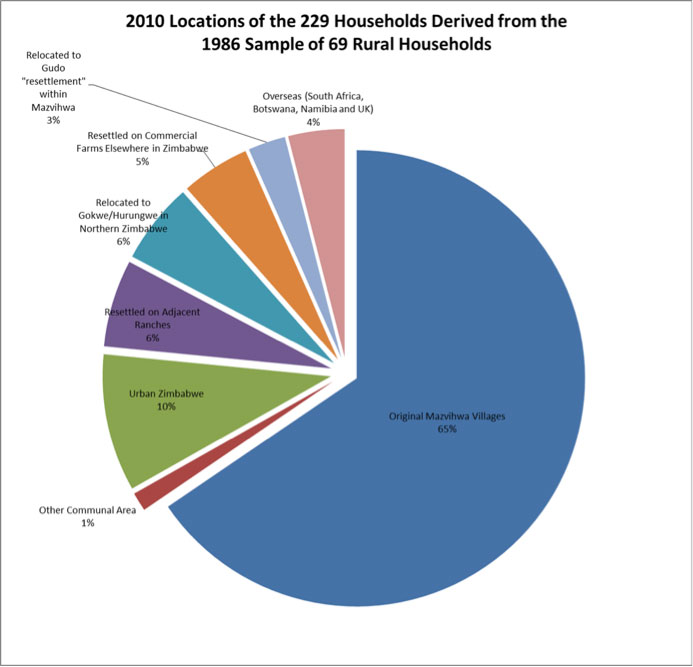 Locally-collected data by the Muonde team indicates how resettlement lands have modestly absorbed population growth in Mazvihwa. Data on individuals show that the population resident within Mazvihwa increased 40% between 1986 and 2010 while a further 30% was now resident outside the chiefdom.

In the first two decades after independence in 1980 only a few Mazvihwa families were resettled in commercial farms resettled by government on a willing buyer willing seller basis. However in the decade of the 2000s, and in a highly complex and phased fashion, people from Mazvihwa played important roles in over-running the old Texas Ranches that had been controlled for Union Carbide and its successors, holding a large proportion of the ancestral territory of Mazvihwa in the area north of the Sabi southeast of Zvishavane and up to the border of the BuShiri of Masunda and Mandava. They also joined in the invasion of the De Beers ranch on the boundary between Zvishavane and Insiza, lands from which many of the Madhingendau of western Mazvihwa had been expelled in the early twentieth century, before being relocated again from where the next lived (on Laing’s Block) into Mazvihwa in 1948. Others relocated into the Gudo/Makwasha grazing areas within Mazvihwa Communal Area or left for properties elsewhere in the country and to communal areas on the northern frontier of Gokwe. At the same time as they were recovering lands held by mining companies, others from Mazvihwa were being displaced by Rio Tinto from a new diamond mine in Murowa. In their effort to be better corporate citizens Rio Tinto purchased the Shashe Block for them, but found it being invaded by its traditional owners and others from Masvingo to the east. Likewise families from Mazvihwa officially resettled in the 1980s new Zvishavane Town also found themselves being compulsorily displaced in the 2000s by the expanding town. All these rich stories are part of the Muonde experience and the team works with them to document developments and to help resettled farmers establish sustainable production.

The impact of resettlement has been complex both for people and for the ecology. Families followed by the Muonde Team for many years in Mazvihwa and then into resettlement showed major advances in productivity, assets and wellbeing. Yields per person are around double in resettlement areas what people produce on the tired lands of Mazvihwa (and averaged 265% of calorific needs/person/year by the late 2000s), and the better condition of the soil provides greater resilience in the face of drought and allows higher productivity of maize. These results are not just because of agronomic conditions: it was interesting to see in data collected by Muonde intern Daniel Ndhlovu, a student from Mazvihwa studying at Midlands State University that people forcibly relocated to the Shashe resettlements harvested 1.6 tons/household despite a wide range of formal assistance programs by the Murowa Mine, which meant that they still held greater assets, while the voluntary migrants from Masvingo harvested 2.6 tons/household per year in 2014, and also more than twice the amount of pulses of the Murowa settlers. Thus motivation matters too.

The Muonde Team is particularly involved with the people on the old Texas Ranches, what now comprises in practice, a Greater Mazvihwa and is assisting them with a tree nursery run by Davie Chakavanda, now a traditional headman, but back in the 1980s and 1990s a nursery man in the old indigenous tree program in Mazvihwa. Chakavanda is growing exotic and indigenous fruit trees to diversify fruit tree availability for resettlement households who have settled in what was a giant mipane forest, and, ironically, is selling indigenous fruit tree seedlings back to Murowa Mine for their forest restoration efforts.

Muonde is also helping the resettlement farmers peg contour ridges, dams and other soil conservation and water harvesting structures in their lands before soil erosion reduces them to Mazvihwa conditions. Domestic water supplies are a big problem on the ranches because of government lacks deployable resources and aid agencies decline investment in resettlements. Muonde has therefore also tried to assist with the sinking of boreholes because research in Mazvihwa in the 1980s showed the community how much this improved health. The team has also provided workshops, training and advice to small scale commercial occupants of resettlement lands across the district.

One Response to Resettlements: 2015 Statement of Program Rationale and Outcomes