Trees and Woodland Management: 2015 Statement of Program Rationale and Outcomes

The indigenous knowledge of the Mazvihwa community concerning their trees and other plants is quite extraordinary. Depending on the diversity of their ecological zone, and even at younger ages, people in Mazvihwa know hundreds of plant species and their ecologies and uses, even as the area suffers declines in diversity (especially on the clay soils where there are less hilly refugia for plants and a greater tendency for invasive species), and a trend towards simplifying the food system (see graphs below). 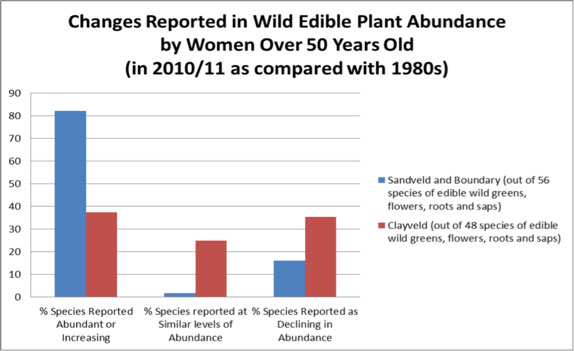 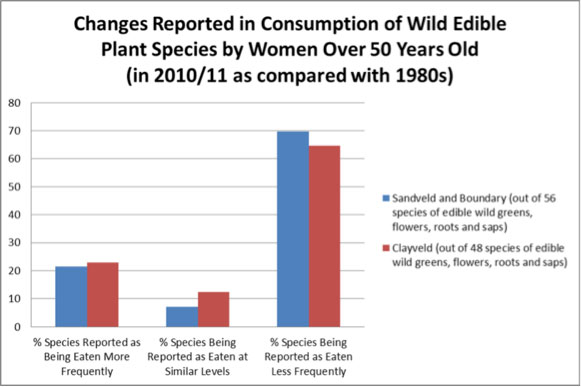 During the first half of the colonial period Mazvihwa was heavily logged in order to generate electricity and construction timber for the asbestos and gold mines to its immediate north. This still has lasting impact on woodland structure in many areas. Subsequently people experienced many years of colonial extension efforts, including arrest and forced labour, to have them reduce trees in and around their agricultural lands, including de-stumping coppicing species and removing shade and fruit trees in fields that are also associated with ancestral spirits and ceremonies. In the 1980s studies of these trees and on their soil fertility and agricultural yield enhancing impacts led the District Councils of Zvishavane and neighbouring Chivi to pass ordinances asking the agricultural extension services to stop In recent years, especially on the worked out sandy soils, there has grown a strong desire to increase the number of trees associated with agricultural lands, and for diverse reasons including to help restore soils. This can be seen in data comparing the numbers of large trees of different species in the fields of the Magaya and Chinguo villagers on the edge of the hills in Marozve between the 1980s and 2010s.

Much of the increase in trees is happening on field boundaries, and to an extent contour ridges, because here they can be protected to some extent from animals and are not in the way of fasrming operations. By 2013 half of all the trees over 2m tall were now on field boundaries in this area, boding very well for the future. There is a lot of intrerest in Mazvihwa in trying to recover worn out sandy soils through a combination of water harvesting, nitrogen fixing and litter producing trees and other organic matter.

This would complement work down by the Muonde Team since back in the 1980s to greatly increase the number and diversity of indigenous and exotic fruit (and sometimes shade and ornamental) trees in and around home areas. In Mazvihwa this is now the norm and most households are planting and growing indigenous fruit trees as well as exotics. Stone walls and hedges to protect these orchards whilst below 2m in height would make a further contribution. 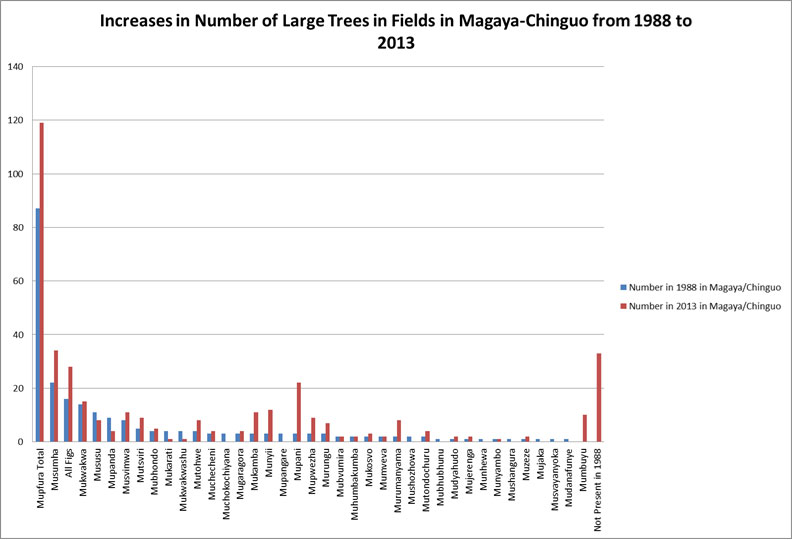 This data on trees in the communities’ fields for 1988 were collected by the late Jacob (Albert) Chinguo; those for 2013 by Godi his son.

This community is interested in diverse questions about their woodland and is able to deploy skilled team members to explore them. Even by the end of the 1980s a huge amount of local research had been completed on the changing ecology of these indigenous woodlands and on firewood use, in turn contributing to changes in local management practices, for example around firewood collection. In the early 1990s the community decided to outlaw the cutting of live firewood, obliging its members to go further to search for naturally dead wood. This decision reflected realization of the consequences of government-imposed concentrated settlement in the 1960s which was leading to very uneven pressure on woodland. In the droughts of the 1980s and early 1990s there were significant tree deaths in woodland areas far from homes where the woodland had become thicker. The effect of these rule changes was to allow woodland recovery around villages by evening out harvesting pressure, as well as encouraging greater male involvement in firewood collection using donkey carts. The results were so favorable that the system spread to neighbouring communities like Chivi. By the 2000s however the role of these rules had changed again. The expansion of home fields around villages removed many of those recovering woodlands and the massive expansion of brushwood fencing depleted the rest, while generating a ready supply of dried branches as the fine thorn twigs decayed and were eaten by termites. Thus the programs ion hedging, fencing and drystone walls necessarily related to the work on woodlands. 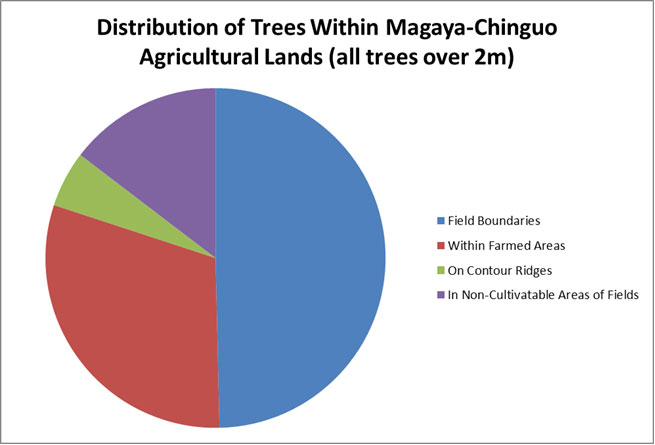 In the 1980s one of the issues of local concern was the shift in species composition of the woodland from Mopani to Acacia, first A. nilotica and then A. tortilis. Studies by the late Mathou Chakavanda and Oliver Chikamba with an Oxford student, Bryn Higgs, proved local theories that this was being driven by the speed of Acacia establishment under goat grazing in former farm lands abandoned by government edict (i.e. the disturbance regime), and interestingly, at least in some areas like Mudhomori this pattern is now being reversed. The 1987 studies mapped woodland distribution and carefully assessed diversity and size classes in quadrants and transects across eastern Mhototi; the Muonde team are excited about replicating these studies thirty years later to determine long term trends down to the species and size class level.

One specific topic under exploration is infestations by mistletoe members of the Loranthaceae, of which there are more than twenty species known in Zimbabwe, their distinct bell and tube-shaped flowers pollinated by a clade of nectar-drinking sunbirds while a second group of birds eat and spread their sticky fruits. These mistletoes parasitize water and nutrients from their tree hosts but also photosynthesize on their own behalf. 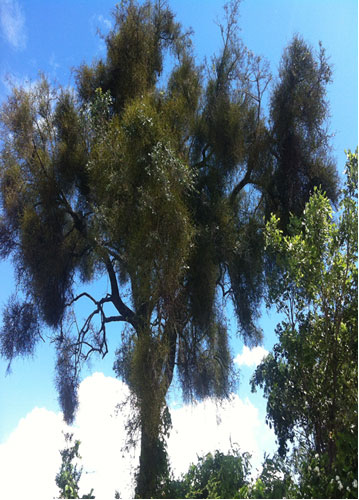 An unusually heavily mistletoe-infested tree that will likely die if not pruned.

Mistletoes – called “gomarara” in Karanga – are much more common on some tree species than others, but abundance on different species and in different landscapes can change dramatically over time as comparison of the recent findings of Godi Chinguo with those of his late father Jacob in the 1980s well demonstrate. One species that is often infected is the highly valuable mipfura, Sclerocarya birrea, or marula. This species has a wonderful fruit from which a refreshing and/or alcohol drink called mukumbi is made, and it also has a nut of high quality oil. The bigger (older) the tree the more mistletoe accumulates, but it is also clear that some trees outlive their mistletoe hemi-parasites by sacrificing limbs or other means, and can survive many years with high levels of infestation.

But it is also clear that the relationship between tree size and number of mistletoe infestations is not stable over time, and for mipfura there has been a significant increase in load over the last twenty five years as shown in the next graph. 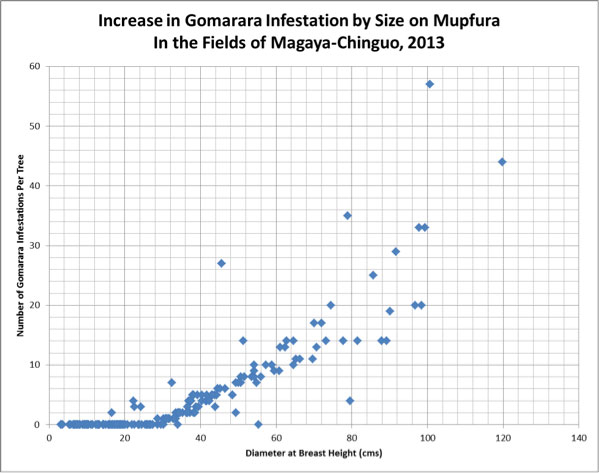 When Godi Chinguo carefully counted the number of mistletoe growths per tree and measured tree size a striking relationship was revealed.

As an illustration of how complex this is, and how fascinating the Muonde field research can be, Godi Chinguo’s work revealed that female mipfura trees, at all size classes, are significantly more vulnerable to heavy infestation than male trees. It is not clear why this happens, or if it is the case everywhere, but it may interact with a curious sex ratio relationship (S. birrea is dioecious so there are males and females). At small sizes there are more than two male mipfura to each female (sex as assessed by producing fruit), though this is likely because some individuals delay sexual maturity; but in this population even between 20 and 60cms diameter at breast height (a substantial size) there are one and a half times as many males as females. Only at the largest size are there more females and males, perhaps because long back before diesel flour mills mipfura had to be cut frequently to make grinding mortars and the local rule was to preferentially cut males rather than females. But is the bias in the middle-sized age categories because the female trees succumb to their heavier mistletoe infestations? This is an issue of economic importance as well as of glorious biodiversity. Other studies report strange sex ratios in mipfura, but do not link this to mistletoe infestation. 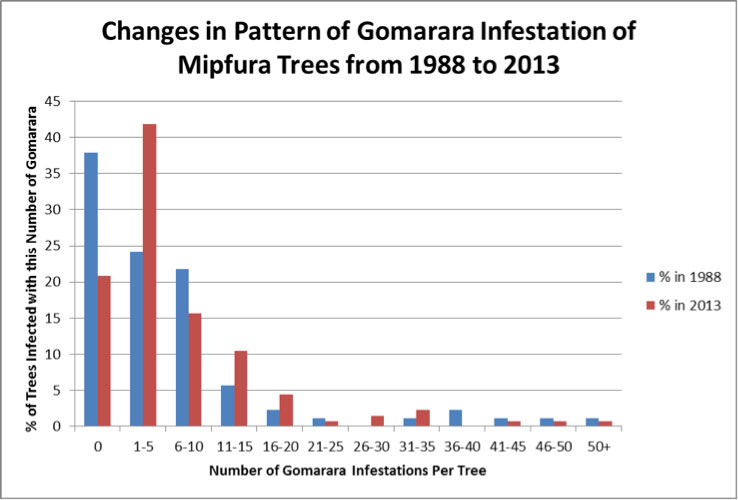 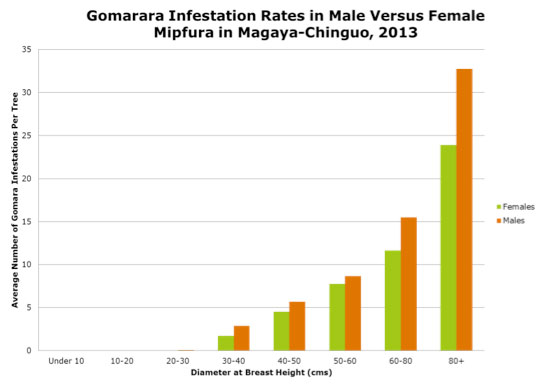 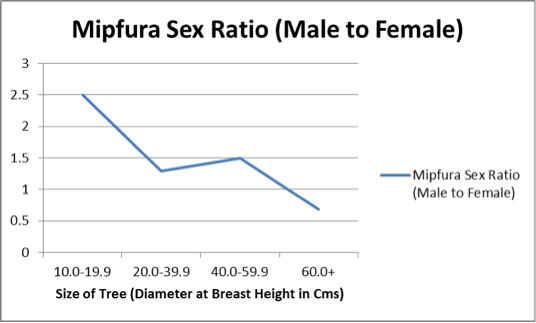