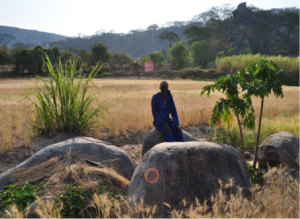 Mr. Magwisanye in 2010 in his field of winter wheat in a natural wetland for which his father and then he developed an elaborate systems of ponds and gravity-based irrigation systems to enable production throughout the year and in both wet and dry years. In the 1940s the government banned his father from growing wheat, and he only began again after independence.

In common with many other semi-arid regions the ancestral agricultural system in Mazvihwa was not based on extensive dryland farming but instead focused around the intensive use of natural wetlands – makuvi or dambos in the hills and majeke riverbank gardens in the plains. Elaborate systems of trenches and furrows were dug by hand with heavy diagonal hoes to manage water in these areas and create a matrix of wetter and drier areas in which rice and maize could alternatively do well. The approach enhanced resilience because in wet years the rice would do well and over-run the field, and vice versa with the maize in droughts. During the colonial period a concern with preserving water supplies and with constraining African commercial productivity led to the suppression of wetland farming, especially from the 1940s, and when land use planning was implemented African fields were physically relocated from the lowlands to the watersheds on penalty of arrest. Meanwhile the ox-drawn plough and other technical changes made extensive dry land clearance easier and economic linkages and larger livestock populations increased local tolerance for frequent harvest failure, all of which encouraged an extensive farming approach, which of course is difficult to sustain because of the breakdown in soil and water management. 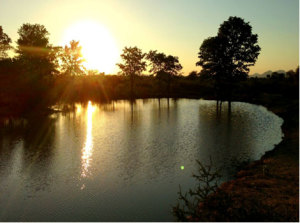 The pond at Mr. Banda’s in Gudo. It was Mr. Banda who opened our eyes to how Phiri-type approaches designed for sandy soils in the rocky hills could be applied to the clay soils of the “deve” in Mazvihwa.

A return to more intense farming with population growth and land degradation can only happen through enhanced water management in a dry region like this. In thus modern period it was Mr. Phiri who re-developed approaches to wetland farming at his home in Msipane in neighboring Rund Communal Area. Frequently taken to court by the Rhodesian authorities a magistrate eventually gave him an exemption because it was entirely obvious that his ponds and earthworks were reducing rather than increasing run-off and erosion. In 1986 Mr. Phiri joined the team that became the Muonde Trust and spent several years encouraging similar innovations in Mazvihwa. Although he found sympathy, and his well and dam making skills were much sought after, no farmers were prepared to engage actively in water harvesting in their fields. This was only twenty years after people had dug soil conservation works of dubious if not negative value under forced labour, and there also remained fear of authority in any “interfering” with water. These ideas were still the stuff of dreams shared with people like the late headmen Magaya and accentric hurudza like Muzondiwa. The first innovator in Mazvihwa to take this up directly, Mr. Banda of Gudo, and following the 1992 drought, did indeed face harrassment for his dam and gully control efforts but again eventually won through. Nevertheless, apart from an interesting project in the Madzoke Valley where Mr. Phiri briefly got the backing of Africare to help farmers change their contours from being designed to shed water to catching and storing it, it is sadly the case that during the 1990s the Muonde team had all but given up on encouraging water harvesting. 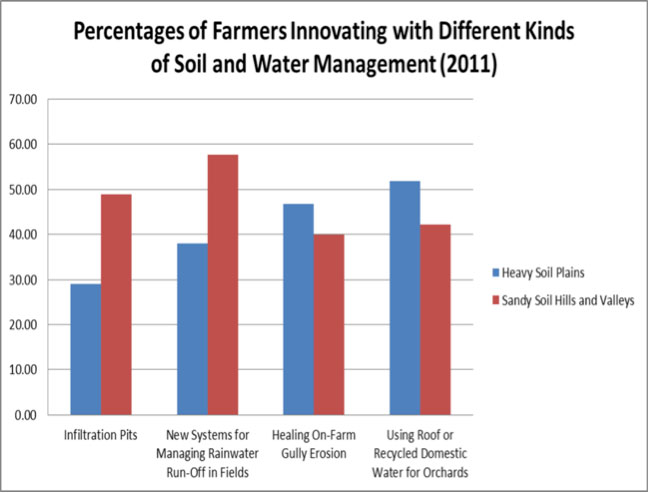 In short it was with some astonishment that the team watched water harvesting explode as a practise during the dark days of the 2000s and entirely without external encouragement. By 2011 between 30 and 60% of farmers were practicing different kinds of water harvesting in the different ecological zones of Mazvihwa.

Even more amazing was that by this time up to a third of farmers had switched their sacred Rhodesian countour ridges (or swales) into new designs to gather and hold water for infiltration and storage. And many full scale innovators had emerged transforming their entire lands, including Takura Moyo in Mhototi, and Bouwas Mawara down in Murowa, who was to win the 2014 Phiri Award for Food and Farming Innovation. 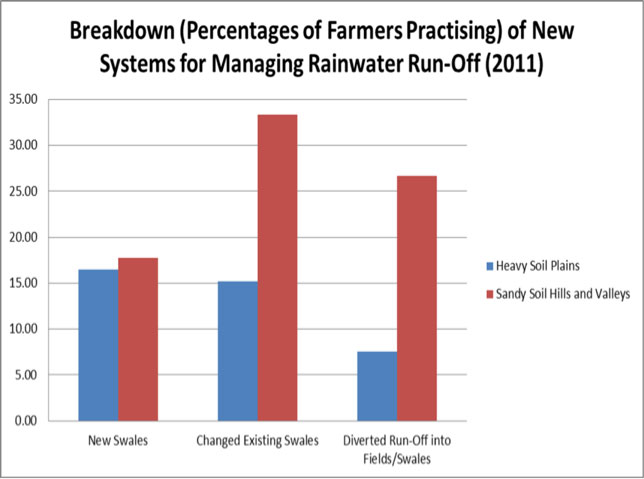 While the farmers of the hills focused on infiltration and management of lateral flow under the soil surface and its storage behind ponds in places where heavy clay bands could trap and hold it for later use, water harvesters on the clay soils focused on capturing surface flow. By 2011 some 7% of farm households on clayveld and 13% on sandveld had built these individual ponds most holding typically 100-300,000 liters of water, and a revolution had begun.

Water harvesting in Mazvihwa was now being driven by significant economic opportunities to produce early season vegetables, as well as to enhance drought resilience in the rainy season of the principal crops and gardening (or farming) in the dry season with micro-irrigation. One of the households in Muonde’s long-term sample (which used to monitor trends), namely that of Handsome Madyakuseni, had developed a two-pond system filled by local stream flow and (astonishingly) had built a five roomed house during the years of economic crisis from the sale of tomatoes and other garden crops that this supported. 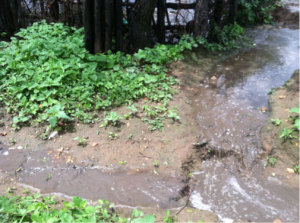 Water running off a poorly laid out road during rainstorms is channeled by Leo Gwanyanya from Mudhomori Village into a pond in his field which held 200,000 liters after a small rainstorm on January 4th, 2013 (by January 9th, some 90,000 liters remained). This water helped considerably with the 800 liters needed per day for watering his early season tomatoes (begun with water carted from a nearby cattle dam), earning him an extraordinary $8,000 from premium priced tomatoes before the season proper started.

From 2010 the Muonde team started to map these efforts, to connect innovators to each other, and to re-connect them to Mr. Phiri, who we brought again to Mazvihwa in early 2013. At this time the opportunity arose with the visit of volunteer Brock Dolman to teach the use of the Ancient Egyption A-Frame to enable farmers to accurately peg soil conservation works on their lands. The old people quickly recognized it from the forced soil works era of the 1960s when it was called “chidhongi” (the little donkey), when, rather than being taught to farmers to measure their own fields, it was instead used as a passive measure of whether the trough they had dug was the stipulated two meters wide “enough for me to drive my landrover down”, as the Land Development Officer would say. 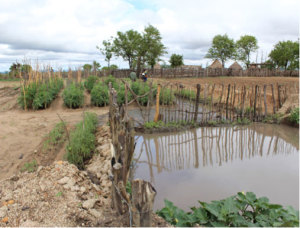 Brock Dolman came because when Abraham Ndhlovu met him in 2012 at the Occidental Arts and Ecology Center he immediately declared “this is another bullfrog like Mr. Phiri”. It proved to be a decisive contribution.

With the launch of the A-Frame and farmer-to-farmer extension on the layout of water harvesting structures (working with the renowned Phiri Principles made globally famous by Brad Lancaster in his best-selling Rainwater Harvesting for Drylands and Beyond the quality and scale of farmer soil and water conservation works could increase rapidly. One crucial decision in late 2013 was to send groups of the most dynamic women farmers from Mazvihwa to apprentice with Mr. Phiri and his wife Constance for a week in Msipane. 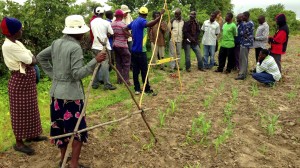 Muonde workshop training in the use of the A-frame. 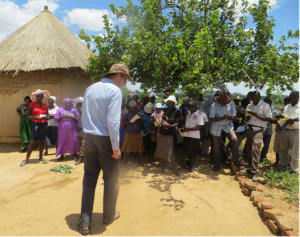 Brad Lancaster himself came back to Zimbabwe in February 2014 to meet again with Mr. Phiri as the man who had inspired him to turn back and tackle the water crisis in Tucson Arizona, and to teach classes to the Muonde team, including on how trees, shade and water can interact most fruitfully in homesteads.

By November 2014 the Muonde Team reported that this group had pegged with participating farmers an incredible 378 zero-contour swales of which 125 had been completely dug and 241 were still under construction. This is a total distance of probably 100-200kms; more accurate measures will be developed in future. Although we do not yet have an accurate assessment of the number of water harvesting ponds in Mazvihwa it is clearly now in the hundreds. At the same time these outreach efforts have led to the creation of countless sand traps, gully healing and other catchment management actions, enough to begin to make hydrological change at least at the micro-catchment level. More importantly the work of the cultural brigades to teach the A-Frame and peg people’s fields with them are now largely over: most farmers in Mhototi Ward are now trained how to do this for themselves, as also are the school children (courtesy of invites from the teachers); as well as hundreds of farmers also in resettlement and other adjacent areas. Much of the work now is on helping farmers refine the best techniques for using as well as harvesting water and for developing the most efficient approaches for crafting farm and landscape level systems. For this more action-research and skilled volunteer help will be needed through 2015 and beyond.

The spread of water harvesting and the associated transformation of watersheds undoubtedly is having significant impacts on biodiversity. This surely will particularly be the case with frogs and toads which in African savannah systems are highly adept at finding and breeding in ephemeral pools of water. Brock Dolman visited these human-generated wetlands at night in the rains of January 2013 and recorded songs and images such as these, which are turn encouraging the research and conservation interest of Dr. Rob Hopkins of the Bulawayo Natural History Museum and others internationally. 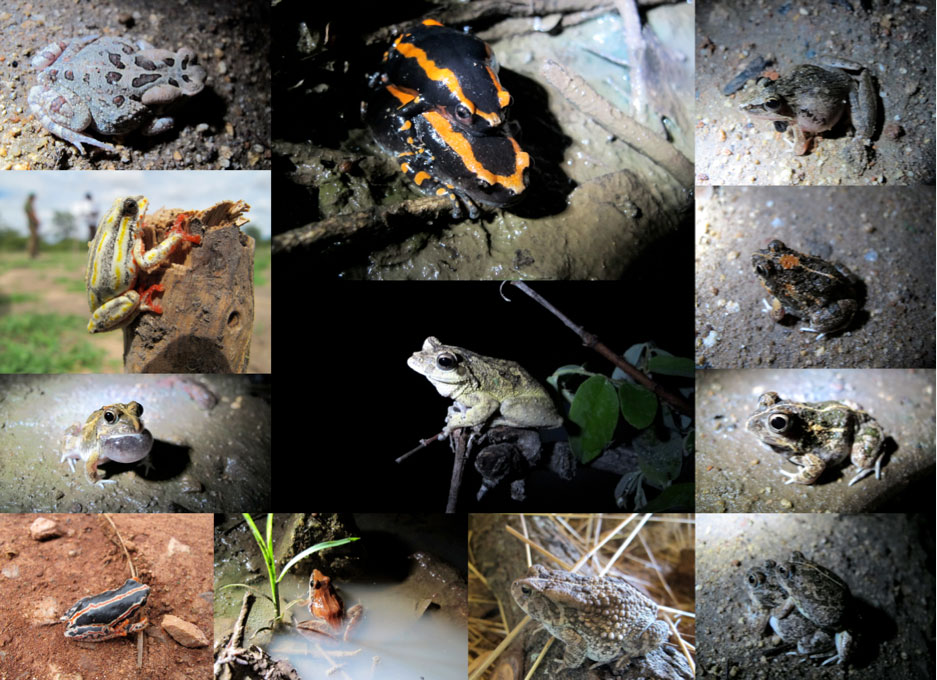