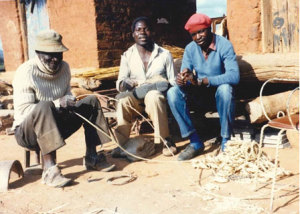 The efforts that led to the legal formation of the Muonde Trust in 2014 actually started in the 1980s in the years after Zimbabwean Independence. Working with some unusual field researchers who were hosted and supported by the Mukamuri family who ran our Mhototi School, we began to document and evaluate our traditional knowledge and launched community-based woodland management projects, water projects and indigenous seed exchange efforts. We learned a lot in this process, in particular how to value our own knowledge. However because the funders of these projects often kept control or their staff were educated outsiders who lived in towns, sometimes these first NGO programs still felt rather like development projects, and they did not sufficiently take root.

Nevertheless we did not forget the inspiring ideas of our leaders at that time, like the water-man Zephaniah Phiri, or abandon the research skills we had learned. Nor did we lose our desire to understand and improve the special place that is Mazvihwa. Our sense of the vitality of the indigenous ran strong. Through the 1990s we continued to document social, ecological, welfare and economic change in our community, and we built up a very detailed understanding of our situation, and we continued to observe the power of innovation amongst us to find new ways of tackling long-standing and contemporary challenges.

All this work involved many members of the Mazvihwa community and our people became our great asset. Many in our community used the ideas being generated to improve life and look after soil, woodland and seeds, and the need to do that became even clearer during the economic crisis of the 2000s when we had to become more self-reliant. But it also became clear that what we needed to do this was to have our own institution to advance local change on our terms and put these ideas to work more effectively.

The Muonde Trust itself therefore emerged in the late 2000s as the vision of two leading members of this community—Mr. Abraham Mawere Ndhlovu and Dr. Billiards Mukamuri—and a Malawi-born Englishman, Dr. K.B. Wilson. Mr. Mawere had been a leading member of the action-research team since 1986, and was the elected councilor of Mhototi Ward in the 2000s, while Dr. Mukamuri who had been raised in Mazvihwa was then with the Centre for Applied Social Sciences at the University of Zimbabwe. Meanwhile Dr. Wilson had first visited in 1980 when a school teacher at Dadaya, when he tried to support a small-scale irrigation project at Mhototi, subsequently doing his doctoral work in human ecology in Mazvihwa (1985-90), since which time he has been enjoying visiting the area until today.

In 2012 Abraham Ndhlovu spent several months as a “Visiting Organic Intellectual” at the University of California Berkeley with the generous support of the Canadian IDRC. Here he shared with many the power of community-based research and of indigenous innovation, and from this The Friends of Muonde was formed at Earth Island Institute in 2013 to support these efforts. Dr. Wilson runs Friends of Muonde in a voluntary capacity, raising friends and raising funds, and providing advice and assistance if and when necessary. Finally, and in 2014, The Muonde Trust was registered in Zimbabwe under the leadership of Mr. Abraham Ndhlovu. This website, established by Muonde volunteer, Robert Hickling, shares the work done by the Muonde team since 2013.