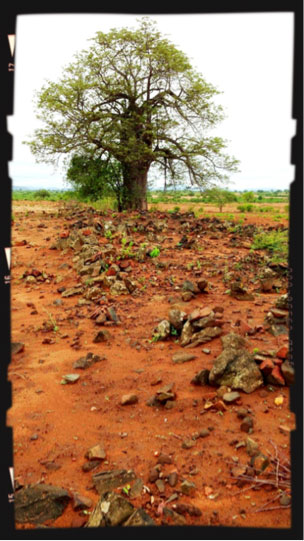 Mazvihwa is renowned for being hot and dry, but we love it for its baobab trees and strong red clay soils

The Muonde Trust works in the Mazvihwa and neighbouring areas of south central Zimbabwe (Zvishavane District).

Muonde is rooted in an indigenous community whose lands are those of the VaNgowa chiefs, the Hove people of the fish and pool to whom we say “musaigwa”. We are speakers of chiKaranga and belong to many clans, especially the Shumbas (nyakhuwa, Mhari and charambira), Moyos (Rozvis), Ndhlovus, Dubes, Shokos, Shiris and others. Ours is a challenging place but we are united by the need to maintain respect for the ancestors of our land, the rain-bringing mwari of Matonjeni, and the Creator by keeping well (“kuchengeta”) our place, our hills, wells, rivers and seeds.

During the colonial period (1890-1980) all of our land was alienated from us for white settlement but we clung onto it strongly while receiving many other people who were evicted from their ancestral lands elsewhere. All around us there were big and small mines for asbestos (Shabanie, Mashava and Slip), gold (Sabi and Sabie Vlei) and other minerals. The sacred mountain of Buchwa, was mined for iron ore and many strange things happened there. Many former migrant workers on these mines from Malawi and Zambia had nowhere to retire and came to live on our lands. 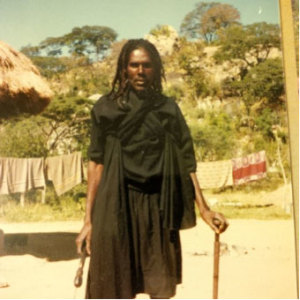 The late Mr. Spikita Pasira was one of our “nyusa”, or spiritual messengers to the rain shrines of in the Matobo Hills. Moving there in humility with our “rusengwe” offerings, the nyusa return with blessings, seeds and instructions on how we should better harmonize with nature.

Luckily our land was eventually considered too poor for white farmers and during the 1960s and 1970s, and with the coming of the struggle for independence, much of it was quietly returned to us as Tribal Trust Lands. More recently we mobilized under “jambanja” and got back much of the rest of our land across the Sabi River that had been held for decades by Union Carbide and some others. We say that we “re-grabbed” it from those who had earlier grabbed it from us. As Muonde Trust our work covers the looking after of all our traditional lands, and we also regularly assist our neighbours.

Within Mazvihwa, our organization is based mainly in the Mhototi Ward and parts of the Murowa Ward. Many members of our community are now living outside of our territory on resettlement lands, but we continue to connect with them, for example on Shashe Block in Mashava where 97 families from Murowa were moved by Rio Tinto to make way for a diamond mine in their home area.

Cooking up the delicious “matylonza” (the giant larvae of sphingid moths).

Our place is a dry one (with just 450mm average annual rainfall). Particularly dry is the red clay “deve” lands that were once mopane forests full of “nhoro” (kudu) and other wildlife and delicious “matylonza” (the giant larvae of sphingid moths) that feed on the leaves of these beautiful mopane trees (see photo).

In Mazvihwa the rains are ever erratic, and even though we hold mitoro ceremonies every year and honour a chisi (rest day for the soil) every week, and climate change is only making this worse. Agronomists call our area Natural Region Five, and the country’s least productive, not suitable for farming except extensive cattle or game ranching. But we like the place and survive and thrive here as farmers and stock-raisers through developing and using knowledge about the ecology, the diverse and rich woodlands, the delicious biodiversity from mushrooms to wild fruits, and through ways of farming with local crops and varieties that are adapted. 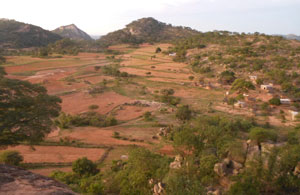 The Madzoke valley in the heart of Mazvihwa. Each hill is the ancestral stronghold (nhare) of our one of our founding families. Intensive farming of the sandy soils and natural wetlands in between requires great attention to managing water and soil structure and fertility over many years.

Unfortunately the ways that outsiders have encouraged or forced us to live and farm have not usually been suited to our lands and have mostly not worked well. Instead of being valued as people who understand our place we are said to be backward. For example the colonial government forced us to build contour ridges to prevent soil erosion, but these were not designed to work with our soils and by being sloped to shed excess water led to massive run-off on the heavy clays, which in turn dried our lands and silted our rivers. After fifty years we can finally replace them with dead-level contours and water storage systems. Likewise we were diverted by the enthusiasm for hybrid maize, whereas our area is too dry for that and needs the indigenous small grains. In this way we are making our own path to development, working in partnership with our ancestral lands, and this is where the Muonde Trust comes in.
©2020 Muonde Trust | Design by roberthickling.com