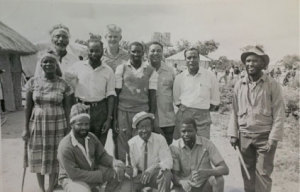 Mr. Phiri (far right) with fellow detainees in Gonakudzingwa Restriction Camp in March 1965, on the visit of Garfield Todd (at back). This is a rare photo recently uncovered in the Church of Christ Archives in New Zealand.

Named for Zephaniah Phiri (CV here), the renowned water harvester and ecological farmer from Zvishavane District whose innovations in vlei farming over a fifty year period earned him first arrest and then national and international recognition, the Phiri Award for Farm and Food Innovators will open a new chapter in advancing indigenous innovation and food sovereignty in Zimbabwe.To know Mr. Phiri is encounter the genius of love for creation in a man who spent years in detention and under torture. Please enjoy this short film that Obrian Mudyiwenyama and Moses Ndhlovu have created with Muonde Trust support for the 2014 Award.

Thirty years ago Mr. Phiri was a founder of the effort that is now Muonde Trust so we have volunteered to host this web page for the Phiri Award for Farm and Food Innovators Award. 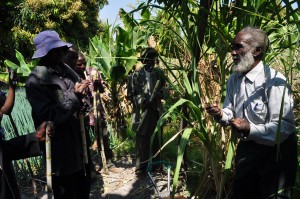 Just as Mr. Phiri discovered new ways to produce food abundantly and sustainably through detailed study and active management of the soils and hydrology of his land so too are other dedicated Zimbabwean farmers making quiet breakthroughs that advance food sovereignty in their communities. Just as Mr. Phiri shared his innovations with thousands of visitors from across the country, Africa and the world, so too can other local innovators be recognized and assisted to disseminate their vision. Just as Mr. Phiri’s innovations—such as water infiltration pits in contour ridges and clay-lined ponds in vleis—are now adopted by tens of thousands of dryland farmers so too can other innovations not yet recognized contribute nationally to the advance of agro-ecological approaches to sustainable food systems. 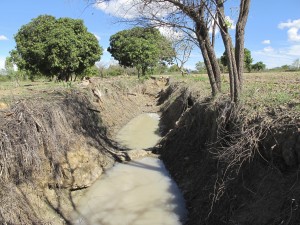 Increasing recognition for local innovation and the creative capacity of food producers to solve deep problems and find new opportunities can help advance a partnership approach to agricultural development in which all knowledge is valued. And it can sustain with dignity the necessarily central place of the women and men who meet the food needs of their communities and the country.The Phiri Award was conceived in 2010 at the ceremony at the University of Zimbabwe where Mr. Phiri received his Lifetime Achievement Award. You can find a description of his achievements as presented at this ceremony here and a collection of hundreds of pages of materials by and about Mr. Phiri assembled in Mr. Phiri’s Book of Life by Dr. K.B. Wilson. 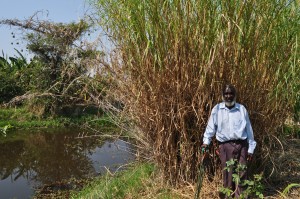 VaPhiri at the oldest of his three fish dams

The Phiri Award is a new programme brought to you by a new organization, The Phiri Award for Farm and Food Innovators Trust, whose Trustees are drawn from leading Zimbabwean institutions in this field.The first Award was given in October 2014 (see separate story) and the Trust is now preparing for the second Award next year. The Trust hopes to work with the innovators we recognize and their potential development partners to spread their good ideas to other communities and the world.

Winners of the Zephaniah Phiri Award will be men and women who have developed and implemented over many years new and exciting ways of producing, processing or distributing food that advance the principles of food sovereignty, including social justice and environmental sustainability. The winners will be innovators in their own right, and not “adopters” of good ideas promoted by organisations, researchers or projects. These innovators will usually have relied on their own resources and energies to develop their practices, and will often have struggled for many years to gain recognition for their work. They will come from small-scale farming communities or marginalised backgrounds in urban settings. From creativity in the face of hardship they will have developed proven new approaches that others have now begun to adopt and adapt. Through the publicity associated with the Award, these innovators and their innovations will have much greater opportunity to improve the lives of Zimbabweans.

Form to return as part of the 2015 nomination process for the Phiri Award for Farm and Food Innovators:

Length: The total length should not be more than three typed A4 pages in font 12 Times New Roman. Documents longer than this will be disqualified.

Language: The application can be in English, Shona or Ndebele.

Send to: email the applications to [email protected] or post them to c/o CTDO, P.O. Box 7232, Harare and clearly indicate “The Phiri Award” on the envelope.

All applications should be in by not later than midnight on: 28th February 2015.

With great sadness shared by people across the world we regret to announce that dear Mr. Zephaniah Phiri passed away on September 1, 2015.

Phiri Award Nominations must be received by February 28, 2015

The 2015 Phiri Award process is underway and we’re looking for more applications around women farm and food innovators: see this article in African Farming.

For this year’s Awards, scheduled for October 2015, nominations must be received by February 28, 2015. The Trust is particularly keen to hear about more women innovators and for people in both urban and rural contexts all over Zimbabwe.
Instructions and criteria for nominations are below.
Please download and use this leaflet to help spread the word!

Trustees of the Phiri Award
for Farm & Food Innovators

The Phiri Award Trust is now raising funds for 2015. Please find the proposal here, and please help us find the organizations and individual donors who can help us grow this award and recognition of indigenous innovation.

For offers of help and sponsorship (great and small) please contact [email protected] or The Phiri Award, Box 3272, Harare.

In 2010 Zimbabwean and international academics, farmers, development workers and others met at the University of Zimbabwe to commemorate the achievements of Zephaniah Phiri and offer him a Lifetime Achievement Award. For decades, VaPhiri and his family have pioneered an innovative system of farming based on harvesting and making optimum use of the scant rain that falls in Zvishavane District in southern Zimbabwe. Despite opposition from the Rhodesian authorities, including an 8-year spell of house arrest, VaPhiri’s commitment to managing his land properly never wavered, enabling the family to transform the soils on their land and to harvest a diverse range of food, produced with minimal inputs.

In the post-Independence era, the Phiri water management techniques began to spread around the country (and indeed the world) as more and more visitors came to his farm to learn the inspirational way in which he brings water alive and makes harvesting it a straightforward and essential task. Zephaniah Phiri has travelled locally, regionally and internationally and has co-authored research papers on his techniques. His achievements have been published in academic works, in books and on film; thousands have been inspired to change by VaPhiri.

At the event in 2010, the idea for the Phiri Award for farm and food innovators was born to honour the lifetime work of Zephaniah Phiri and his family. The award will recognise the efforts of exceptional people who are innovatively responding to their situation and in the process are also spreading the cause of food sovereignty and family farming in Zimbabwe.